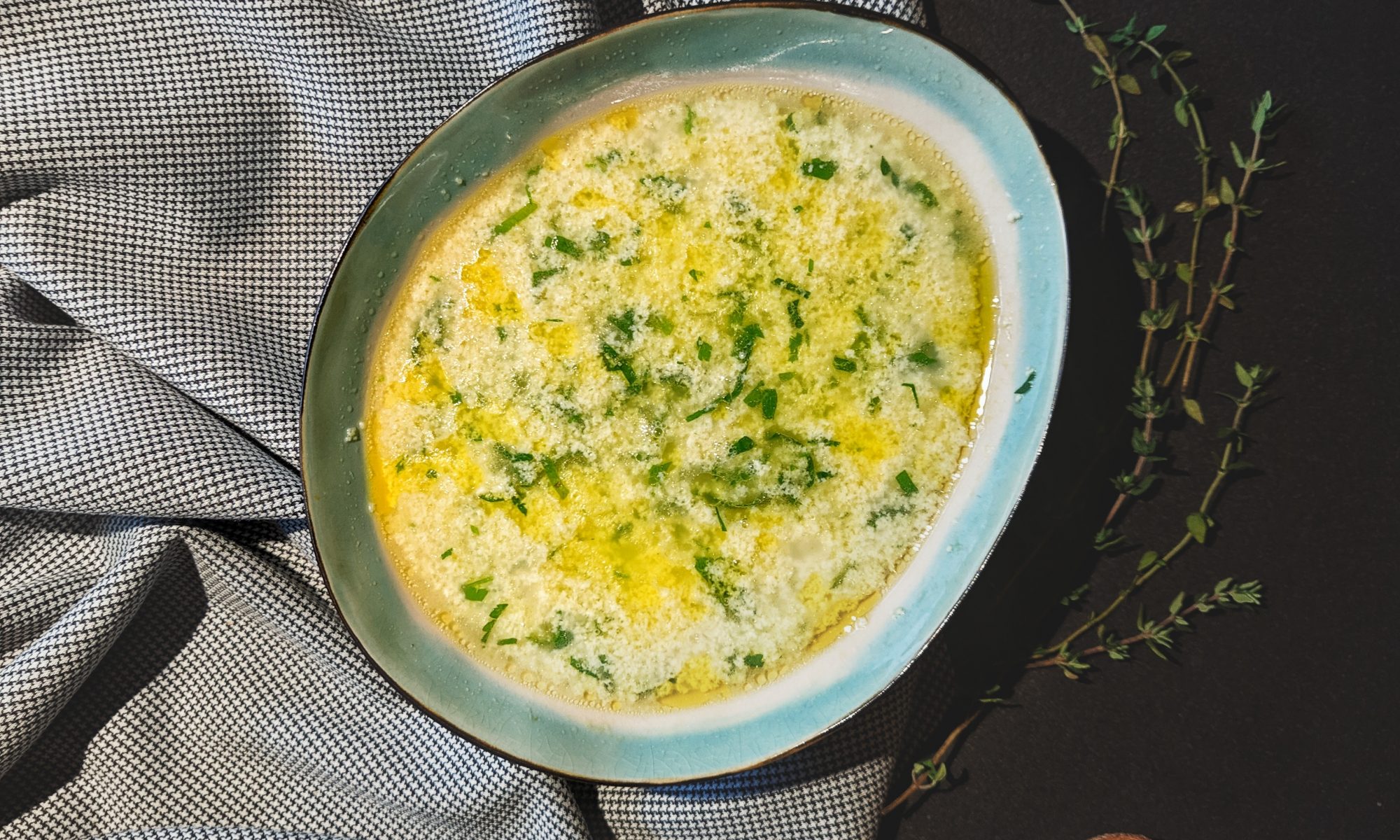 We all suddenly have oodles of time on our hands, plus a lot more concern about our health. Voila! If you’re a person who relieves stress by doing, this recipe is for you – even if you’re not the greatest cook in the world. More importantly, Mom’s Chicken Soup is nourishing AND provides immune support – comfort food that’s great for you.

In times of illness (cold/flu/other virus), this is the recipe I turn to, courtesy of my mom. Note: it freezes well, and there are infinite variations you can try. I like ginger and turmeric for even more of an anti-inflammatory boost, but let your taste buds guide you. This may take a little time and a few steps, but it is seriously, seriously easy to make:

1. Bring water, chicken (gizzards removed) and a large onion, quartered, to boil in a large pot. Water should just cover chicken, so you may need slightly more or less.
2. After liquid boils, skim off white foam from tip before lowering heat to simmer for 1.5 hours uncovered.
3. Add carrots and celery stalks to liquid, cover pot, and simmer for another hour.
4. Remove chicken from pot to cut up into bite-sized pieces.
5. Remove onion and veggies from pot, puree them, and return to pot with chicken pieces.
6. Add fresh dill (and/or parsley if you like) and 1.5 tsp sea salt (or to taste).
7. Simmer for 10 minutes.
8. Enjoy!

Elements that are particularly beneficial for immune support include: bone broth (a hot topic these days), onion, which contains anti-inflammatory quercetin, and carrots and celery containing both fiber and immune supportive vitamin A. So, why not make something good for your health and your immune defenses?

Let me know how this recipe works for you in the comments, and stay well and safe, everyone. 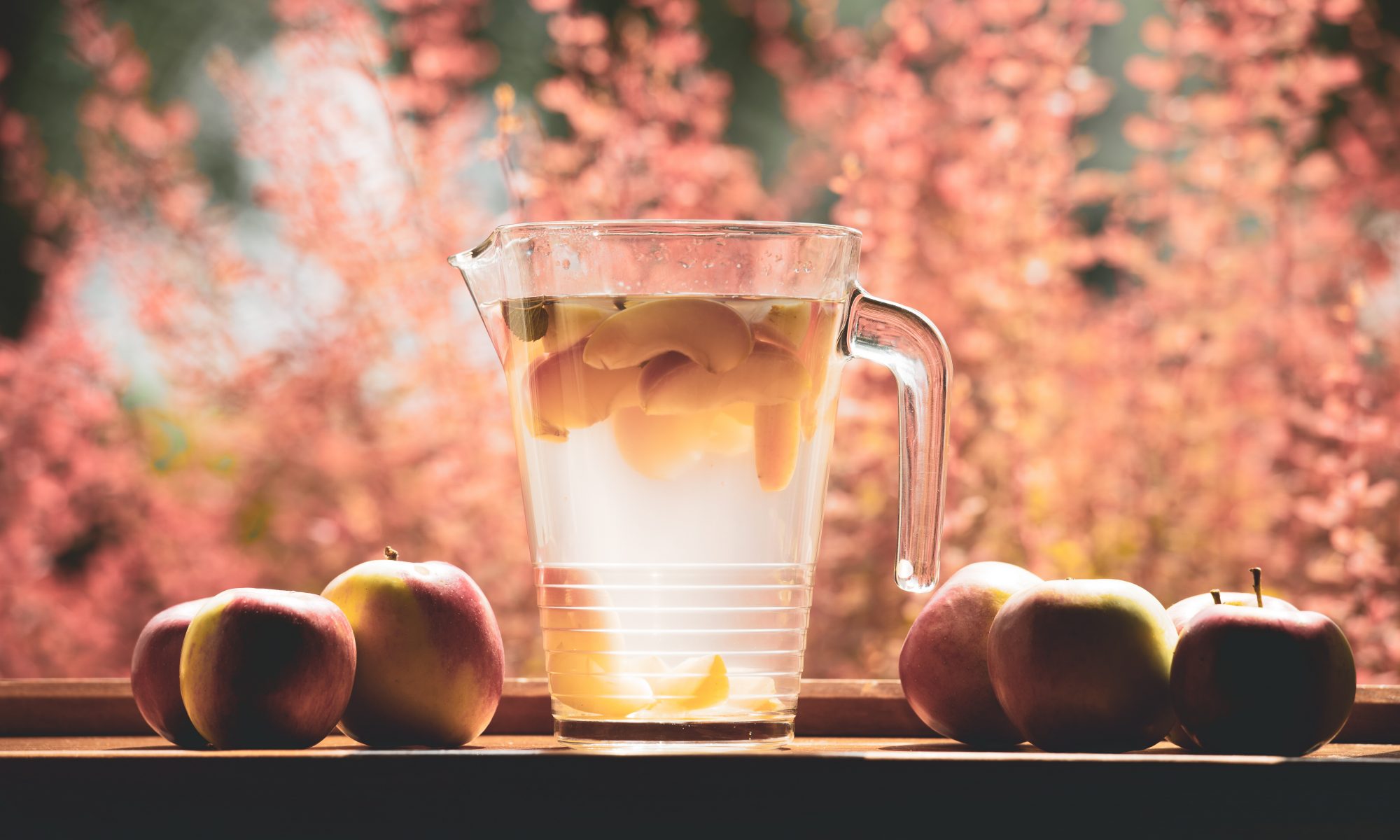 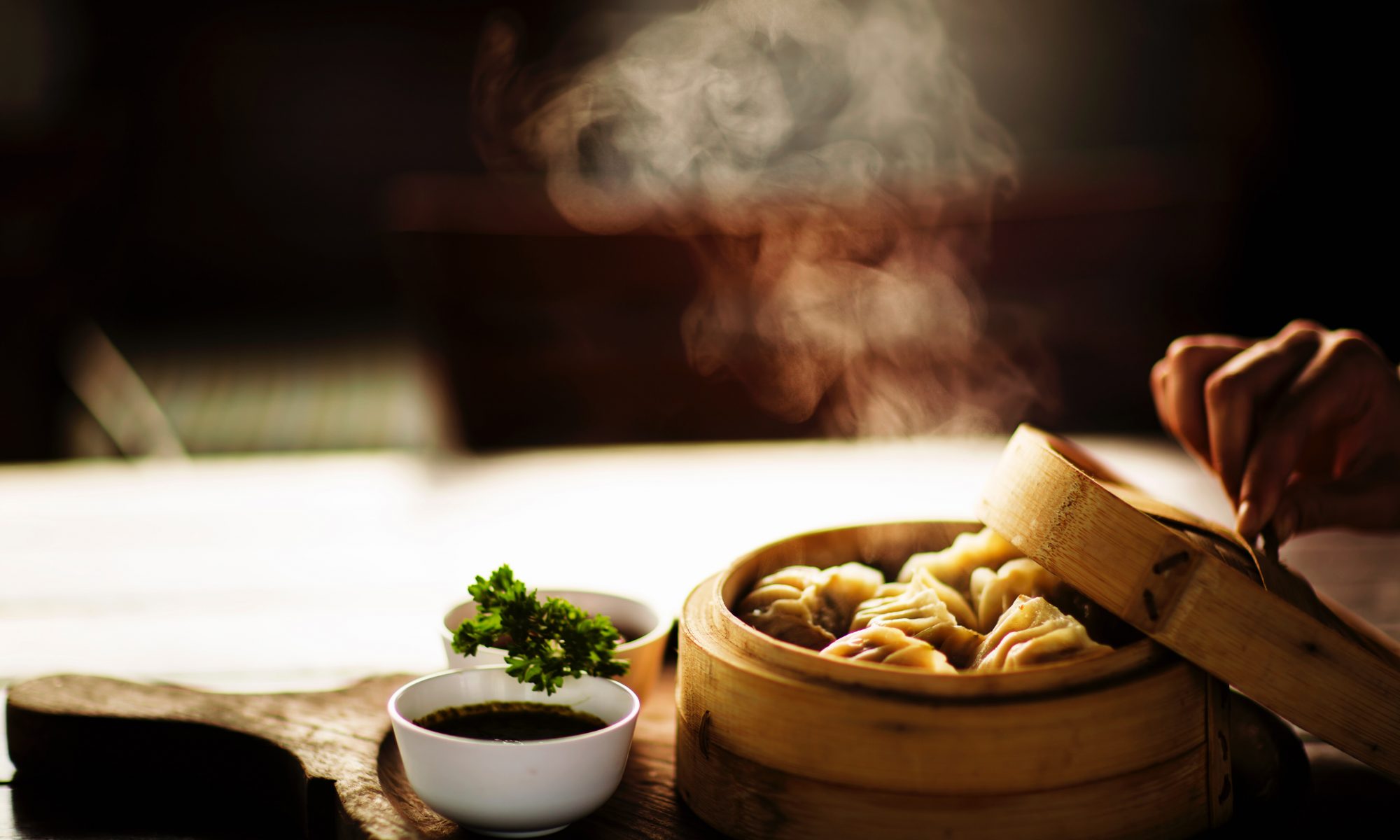 Back when I learned I needed to eat gluten free and soy free, I thought I’d lost certain foods forever, particularly some favorite Asian cuisines!  I’ve since learned how to make many Asian dishes with a few substitutions, the most important of which is Coconut Aminos, a staple in my kitchen and my cooking.  This sauce makes Asian dishes like my Mongolian beef work, but also adds that extra pop of umami as a quick marinade or side sauce.

Still, I thought my days of enjoying dim sum or dumplings were long gone – and the frozen ones just didn’t do it for me.  And then I found a (gasp) gluten-free dumpling class, taught by Kim Hunter of Raleigh restaurant Kimbap fame – cue celebratory dance!

Over a lovely afternoon with like-minded folks, my husband and I learned how to get those dumplings back!  I will confess that ours looked like a wild bear had folded them, but we should get better with time, right?  With her permission, I’m sharing Kim’s recipe for gluten-free dumplings so you, too, can reclaim this delicious dish!

1 lb ground pork (or can use chopped up shrimp or other protein; sweet potato makes a nice vegetarian option!)

Pro tip – cook up a small amount of the filling to see if the seasoning is to your liking!

Note: raw dumplings may be individually frozen for up to 6 weeks!

Note: dough may be stored in refrigerator for up to 2 days

Pinch of salt and pepper

If you don’t have mirin, vinegar, or molasses on hand, simply coconut aminos, sesame, and a pinch of salt will do! 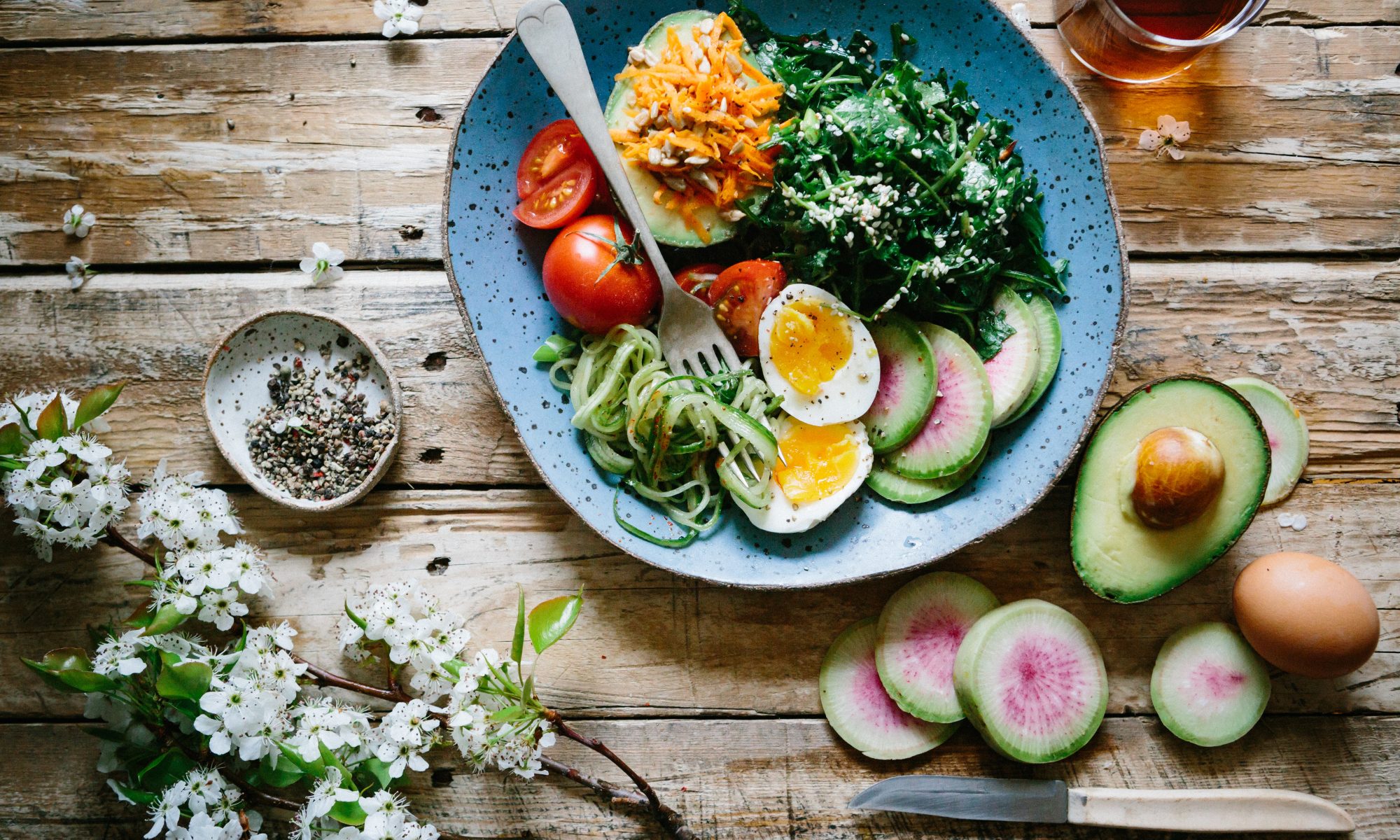 Many of my clients express anxiety about Alzheimer’s Disease (AD). And I don’t have a geriatric practice! But this fear can span all age groups and particularly affects women as both patients and caregivers. The thought of significant cognitive decline can spark deep anxiety – not just because we the fear loss of qualities that make us…well, “us,” but because we may feel helpless in the face of it.

But are we really helpless?  Recent research suggests otherwise!  While we don’t have a complete understanding of what causes cognitive decline, promising early studies indicate that using a multi-factor approach can stem its progression or even reverse mild cases.  One protocol, developed and tested by Dr. Bresden at UCLA, focuses on treating Alzheimer’s more like a chronic, manageable disease. And many of the tools can be found in your own kitchen!

The Bresden premise is that the combined effect of many tactics is key; his protocol employs 36 potential “levers,”  customized according to the specific needs of the patient, including1:

The good news is that these steps will reduce your risk not just for Alzheimer’s, but for many chronic diseases.

How You Can Reduce Your Risk for Cognitive Decline

Now, where to begin?  A good start is to schedule an overall integrative health evaluation that includes an understanding of your functional status for key nutrients and looks at other predictive parameters – if you have this in place, you’re already ahead of the game!  The next step is to optimize a food, lifestyle, and supplement plan specific to your needs. We can help!

Contact me to learn more about how to reduce your risk, today! 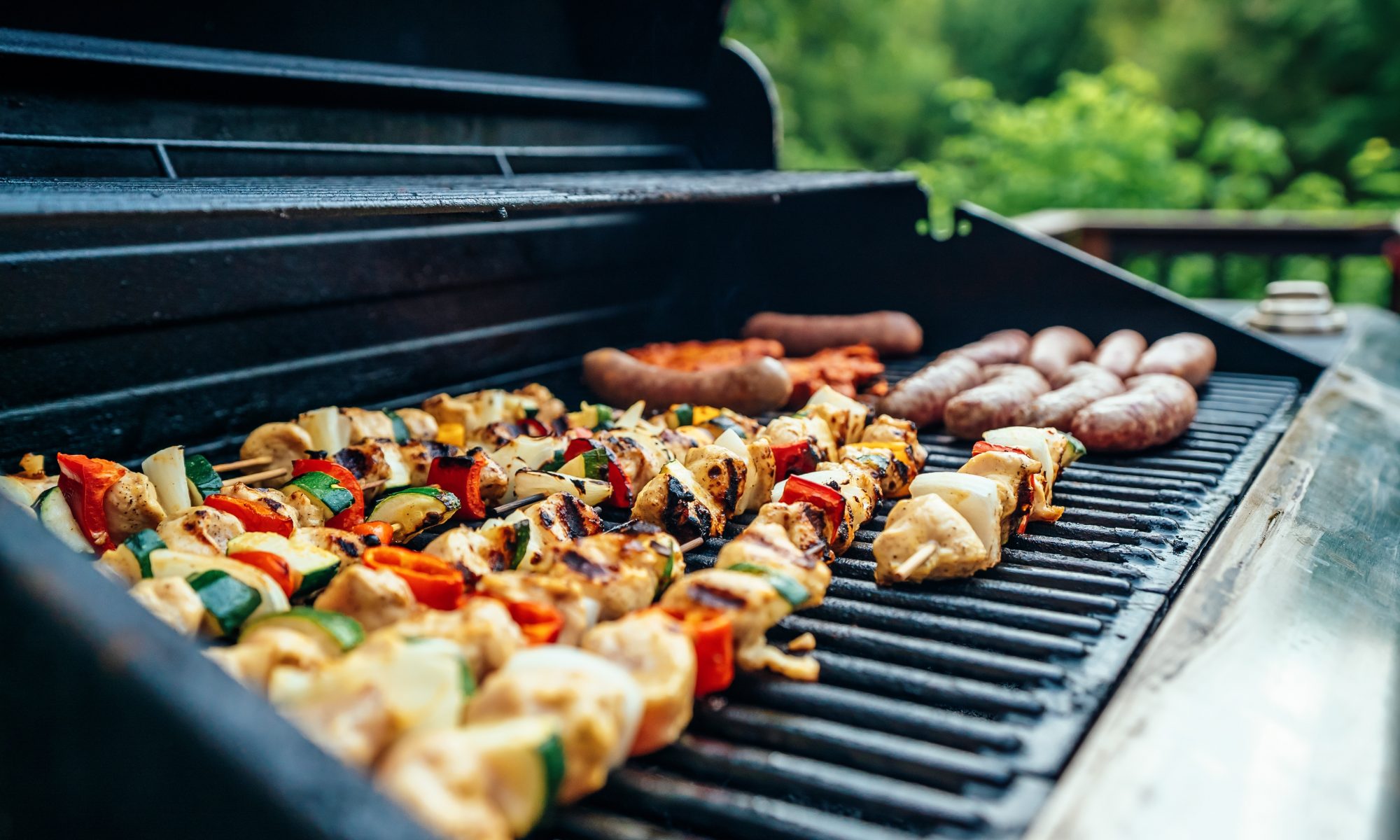 With warmer weather finally (maybe! Almost?) on the horizon, grilling out may be on your mind.  Whether you’re following a specific diet or simply enjoy cooking and dining al fresco, the appeal of easily prepared meat with that distinctive “char” on the outside is one of the main draws grilling as a cooking method.  Easy, healthy, delicious – right?

A different kind of “age” – what are AGEs?

Probably the last thing in your mind is something called “advanced glycation end products,” or AGEs for short.  Yet I see many clients who ask what they can do to reduce their risk for chronic diseases; yet trying to make sense of all the dietary advice out there today – should they not eat meat?  Eat more meat?  Eat more fat like in keto?  While I don’t believe there is one perfect diet for every individual, research and my experience do support some nearly universal principles, number 1: eat your vegetables and number 2: reduce your AGE exposure.

Now what are AGEs?AGEs are formed by a reaction between sugars and fats or proteins.  They are formed as part of the body’s normal metabolism, but excessive amounts can lead to inflammation, increasing your risk for disease.  So, what does that have to do with your cookout plans?  Well, AGEs are increased by cooking meats over dry heat – like a grill.  Those yummy brown or crispy parts?  Are formed by something called the Maillard reaction and can signal increased health risks, like diabetes and cardiovascular disease, due to increased oxidative stress and inflammation.  They’ve even been implicated in cognitive impairment and conditions like Alzheimer’s Disease.

What can you do to reduce AGEs?

Since my goal is to help people enjoy food and not fixate on what they can’t or shouldn’t eat, here are a few tips to help you enjoy those cookouts safely and also balances out their impact by eating low-AGE producing meals generally:

Other tips for when you’re not at the cookout:

Want to learn more? Sign up to receive your free e-book on the pillars of eating for health, deliciously.  And if you need an individualized approach, please check out our services and let us know how we can help!  Either way, my goal is to help you learn to enjoy better health, faster. 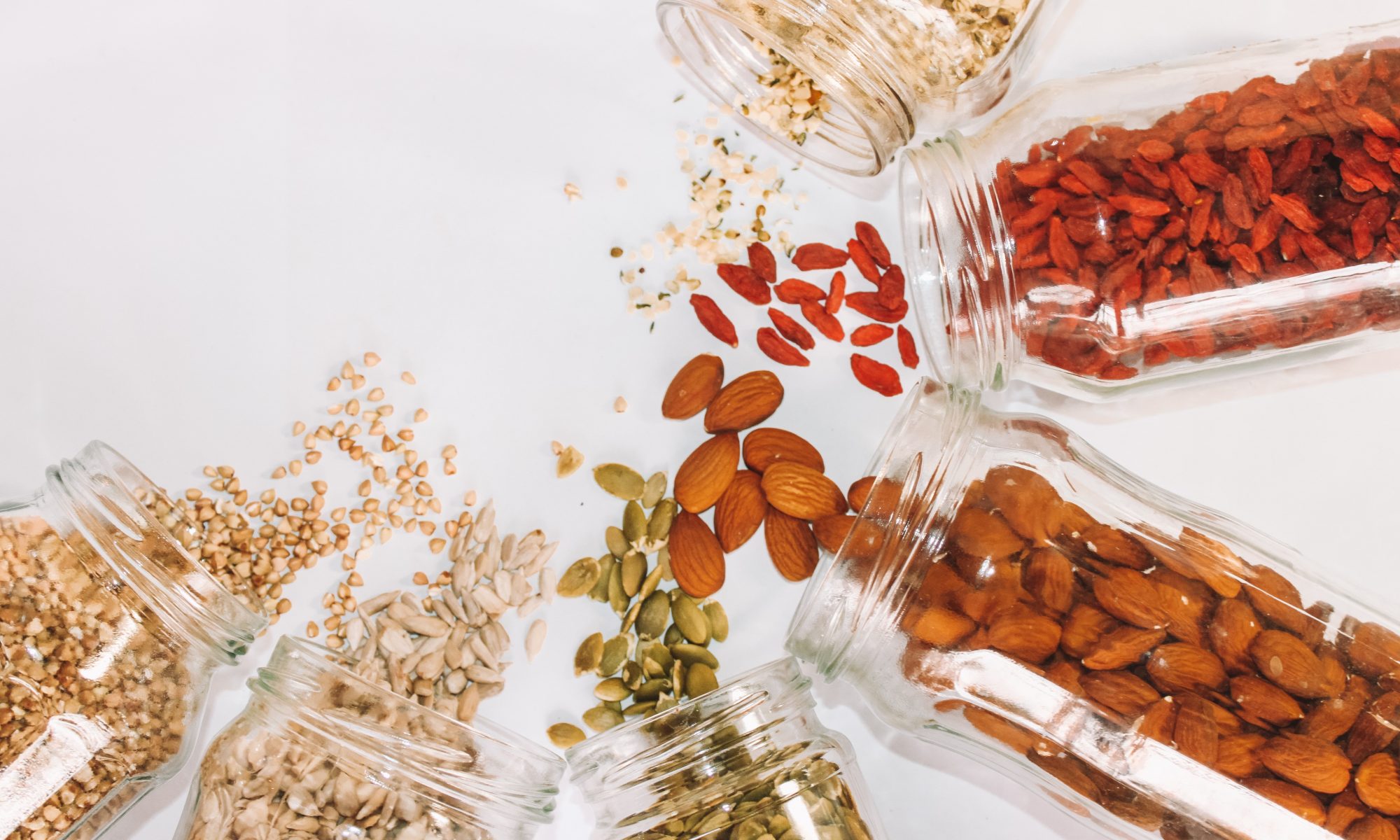 One of my favorite things is figuring out how to make eating with food limitations work, deliciously.  Oh, it wasn’t always that way, but after an initial bout of “why me?!?” and a decade of navigating a veritable obstacle course of later-in-life food allergies – gluten, soy, dairy, nightshades, eggs, you name it! – I have learned that there’s almost no dish I can’t have . . . with a few adjustments, of course!

My secret?  Flexibility, an attitude of plenty rather than deprivation, and some key ingredients that reinforce my view that anything is possible.  Believe me, I’ve tried the other ones, those products that make a hunger strike start to sound appealing . . . not these!  These secret weapons are what I use and recommend to my own nutrition clients, a curated short list of tried and true staples to enrich your eating style, whatever it may be.

Please note that I have no affiliation with these products or companies! I just want to share some great ones I’ve discovered:

Enjoy!  These are my ranking favorites after 10+ years of experimentation.  What are yours?